After the Bell: Strikeforce - Henderson vs. Babalu 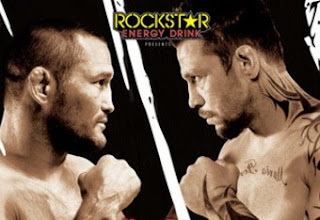 I did the live blog of the Strikeforce: Henderson-Babalu card last night for Cage Potato last night, which was highlighted by highlight-reel KOs and not a whole lot of typing on my part. A few impressions:
1) Paul Daley called out KJ Noons and Nick Diaz after thrashing Scott Smith. I think both guys could take out Semtex.
2) Bigfoot Slva is only 6'3"? Anyway, his D'Arce choke was almost as impressive as him surviving the right hand of Mike Kyle that flattened him early in Rd. 1. It seems that Bigfoot isn't just getting by on good looks any more.
3) Robbie Lawler delivers. I'm still surprised that Babalu outpointed him when they fought (and I'm a Babalu fan).
4) I hate to say it, but Matt Lindland hasn't beaten top competition since his 2006 Rampage fight, which he lost...but kind of won.
5) I'd rather see Henderson fight Jacare, Rockhold, or Lawler at 185 (or 195) before Feijao (at 205).
Posted by Mk at 11:04 PM No comments:

After the Bell: Strikeforce Houston

I did the live blog over at Cage Potato for last night's Strikeforce event, and in the words of my man Ben Goldstein over at CP, "What a weird night of fights...Strikeforce can't catch a damn break." Some highlights:

1) Gus Johnson + Frank Shamrock = Mauro Ranallo still doesn't stand out.
2) Bobby Lashley isn't nasty enough for the cage.
3) No matter how hard he tries, Jorge Gurgel will never be Wanderlei Silva. His stand-and-bang gameplan is making him the Craig Ehlo of MMA highlight reels.
4) KJ Noons throws a sweet left hook. Elbow up and in, weight on front foot. Beautiful.
5) Jacare did more damage than Tim Kennedy did. He moved better and his hands were faster. The judges got this one right.
6) I think Mousasi would beat Feijao.
Posted by Mk at 7:37 PM No comments: 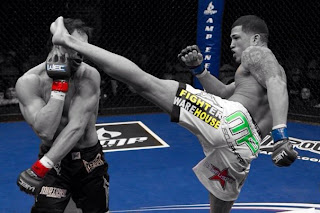 My man "Showtime" is facing Shane Roller next week, hopefully for a title. As one reader commented, "I hope the WEC doesn't f&#k up and give the winner of Varner-Cerrone a title shot instead of the Pettis-Roller winner."
Check out the interview here.

(pic. courtesy of Pettis's Facebook page)
Posted by Mk at 7:39 PM No comments: 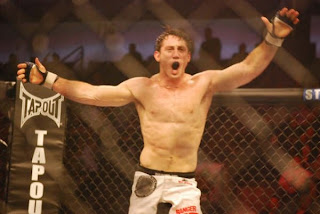 Tim Kennedy is a really good guy. In fairness, my brother is an Army Ranger, so I might like him even if he were King of the Dicks. But still, he's an easy guy to like.

He's unafraid to stand up for what he believes is right, and for his efforts, he is often labeled self-righteous, arrogant, condescending, whatever else. Truth be told, I'm not one for finger pointing, but when Tim points out something about MMA that needs to be changed, I tend to agree. I'm not necessarily bothered by foul language or hospital brawls, but I can't reallly defend it.

Check out the Q&A over at Cage Potato.
Posted by Mk at 9:11 PM No comments: 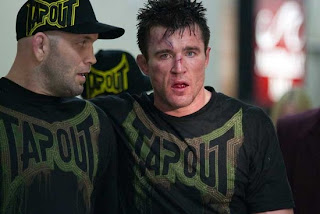 I did an (unexpectly brief) interview yesterday with top UFC middleweight contender Chael Sonnen for Cage Potato, in which he very plainly stated that Anderson Silva is "insignificant" and the reason that he didn't finish Demian Maia is because he couldn't.

Sonnen also explained that because he's not a "gang banger," the word "respect" is not part of his lexicon.

If you're not entertained or amused by this interview, it's OK. You just didn't get it. Kinda like how some people didn't like No Country for Old Men.
Posted by Mk at 8:41 AM No comments: 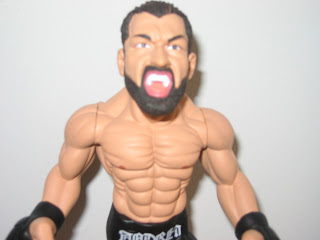 I just finished up a Q&A with Andrei "The Pitbull" Arlovski, the former UFC heavyweight champion who was beating Fedor's ass on January 24, 2009, before attempting a stupid flying knee that left him face-down. (I'm sorry, but that wound just won't heal, it seems.)

Anyway, it was good to hear Arlovski say the following:

- He has "unfinished business to do" in Strikeforce and definitely wants a rematch against Fedor and Brett Rogers.
- His focus is on MMA, not boxing (for now, at least).
- He's been working with Greg Jackson's camp, as well as American Kickboxing Academy.


Check out the whole interview here.

This is Gianpiero Villante (6-0). A while back I did an interview with the up-and-coming Chris Weidman to get the word out before he makes it to the big-time. Well, Gian's another guy you need to know about.

Gian is the Ring of Combat heavyweight champion and he’ll be fighting for the light-heavyweight belt on April 16. According to Villante’s trainer, Keith Trimble of Bellmore Kickboxing, Gian has caught the attention of UFC pres Dana White. Keith also says that Gian will be trying out for The Ultimate Fighter Season 12.